According to the Domestic Violence Act, “domestic violence” means the commission of one or more of the following acts:

Whom does domestic violence laws protect?

The Domestic Violence Act protects spouses, former spouses, children, family members (adult sons and daughters, fathers and mothers, brothers and sisters, and any other relatives), and “incapacitated adults” who are living as members of the family.

The act also covers “de facto spouses”, which means couples who have gone through a religious or customary marriage ceremony, but did not register the marriage.

The act, however, does not cover non-married couples.

What is an Emergency Protection Order (EPO)?

The Emergency Protection Order (EPO) is issued by the social welfare department (JKM), can be obtained immediately — in most cases, within two hours after you apply for it at JKM.

The EPO may contain one or more of the following orders:

How to apply for an Emergency Protection Order (EPO)?

You can obtain an EPO by calling Talian Kasih (15999) which is available 24 hours a day, or by visiting the nearest JKM office. You should bring your IC and your child’s birth certificate (if applicable) with you to JKM.

What is an Interim Protection Order (IPO)?

An Interim Protection Order (IPO) is issued by the Magistrate Court and is valid throughout the police investigation, before the case is charged in court.

In addition, the court may also include one or more of the following orders in the IPO:

Once the police informs you in writing that your case has been charged in court, the IPO would expire within seven days. Thus, you should apply for a Protection Order (PO) as soon as possible.

How to apply for an Interim Protection Order (IPO) ?

You can ask the police officer to start the application for an Interim Protection Order (IPO) when you make a police report.

What is a Protection Order (PO)?

A Protection Order (PO) is issued by the Magistrate Court and is valid once the case has been charged in court and during the court trial (following the completion of the police investigation).

In addition, the court may also include one or more of the following orders in the PO:

The PO is valid for one year and may be renewed for up to another year — as long as there is an ongoing court trial.

How to apply for a Protection Order (PO)?

You can apply for a Protection Order (PO) once your domestic violence case has been charged in court.

The social welfare department (JKM) officer will accompany you to court to apply for the PO. The JKM officer will bring along a few documents including a letter from the welfare department, a letter from the police confirming that the case has been charged in court, a photocopy of your IC and (if applicable), a photocopy of your children’s birth certificate or IC.

What happens if the perpetrator violates an EPO, IPO, or PO?

If your EPO, IPO, or PO has been violated, you should make a police report about the violation.

The police can arrest, without a warrant, a perpetrator for violating an IPO or PO.

How can a police officer or social welfare officer assist me?

According to the Domestic Violence Act, police officers and social welfare officers have the following duties:

What is the punishment for domestic violence?

The punishment for domestic violence varies, depending on the nature of the offence. The Domestic Violence Act, which defines domestic violence and provides protection orders, is read together with the Penal Code, which outlines punishments for various offences.

An example of a charge for domestic violence is Section 323 of the Penal Code (“punishment for voluntarily causing hurt”), which carries a punishment of imprisonment for up to one year, or a fine of up to RM 2,000, or both.  Click here to view other possible charges and their corresponding punishments.

Penal Code charges are not specific to domestic violence, meaning that one can be charged under the penal code for committing an offence against anyone. However, if one commits certain Penal Code offences against a spouse, the punishment may be greater, compared to if the offence is committed against a non-spouse. Additionally, survivors of domestic violence are also entitled to protection orders under the Domestic Violence Act.

According to Section 326A of the Penal Code, anyone who causes hurt to one’s spouse and commits an offence under Section 323, 324, 325, 326, 334 or 335 of the Penal Code would be imprisoned for a term up to twice as long as the maximum term of these offences.

For example, if a perpetrator is charged under Section 323 of the Penal Code for causing hurt to a spouse, the perpetrator will be imprisoned for up to two years (instead of up to one year), and may also be fined up to RM 2,000.

Getting Justice for Domestic Violence 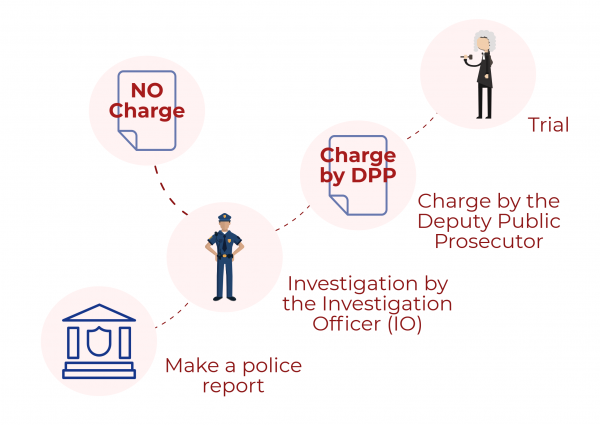 You can make a police report in Bahasa Malaysia or English, either by typing it yourself at the police station or by orally dictating it to the police officer. You can also draft your report in advance.

If you don’t want to press charges but would like to document the incident, you can make a “cover report” instead of an “action report”.

If you file an “action report”, the Investigation Officer (IO) will open an investigation based on the police report you have made. The IO may interview witnesses, suspects, and may also ask you to give a further statement at the police station. Depending on the evidence, the IO may bring the case to the Deputy Public Prosecutor (DPP).

The DPP will determine whether there is a case to charge against the perpetrator.

If there is insufficient evidence, the case will be closed and classified as ‘No Further Action’ (NFA). Then, there will be no charge.

If the Deputy Public Prosecutor (DPP) decides that there is sufficient evidence, the DPP will charge the suspect. The charge will be read in court and the suspect can either plead guilty or not guilty.

The trial process will begin with the prosecution stage, in which the Deputy Public Prosecutor (DPP) calls witnesses to give their testimony. Following that, the defence lawyer (who is the person defending the accused) will cross-examine the witness; this means, the defence lawyer will ask another set of questions directed at the witness. The DPP then re-examines the witness (by asking questions) in order to explain any doubtful or contradictory answer given by the witness during cross-examination.

* This is a simplified version of the court trial process. For the full process, refer to http://wccpenang.org/wccnew/wp-content/uploads/2014/09/Surviving-Court-booklet_English.pdf