skip to Main Content
Definition of rape under Malaysian law

According to the Malaysian Penal Code:

According to the Penal Code Section 376, those who committed rape will be punished with imprisonment for a term up to 20 years with whipping.

Besides that, punishment with imprisonment for a term up between 10 to 30 years along with whipping can be imposed on those who committed rape under these circumstances:

Punishment of imprisonment for a term between 8 to 30 years with whipping not less than 10 strokes can be imposed upon the rapist who committed the offence under the circumstances that he is not permitted to marry the woman under the law, religion or custom.

Lastly, capital punishment or a punishment of imprisonment for a term between 15 to 30 years with whipping of no less than 10 strokes can be imposed on the rapist who causes the death of the woman.

Malaysian law doesn’t specifically define sexual assault, however, there are various laws that cover different forms of sexual assault. Below are some of them:

Getting justice for rape and sexual assault 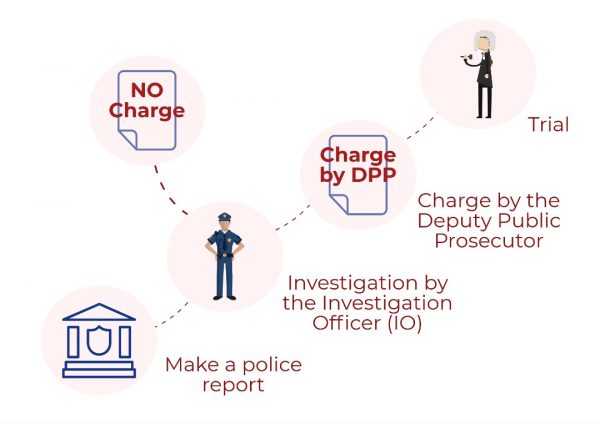 You can make a police report in Bahasa Malaysia or English, either by typing it yourself at the police station or by orally dictating it to the police officer. You can also draft your report in advance.

The Investigation Officer (IO) will open an investigation based on the police report you have made. The IO may interview witnesses, suspects, and may also ask you to give a further statement at the police station. Depending on the evidence, the IO may bring the case to the Deputy Public Prosecutor (DPP).

The DPP will determine whether there is a case to charge against the perpetrator.

If there is insufficient evidence, the case will be closed and classified as ‘No Further Action’ (NFA). Then, there will be no charge.

If the Deputy Public Prosecutor (DPP) decides that there is sufficient evidence, the DPP will charge the suspect. The charge will be read in court and the suspect can either plead guilty or not guilty.

The trial process will begin with the prosecution stage, in which the Deputy Public Prosecutor (DPP) calls witnesses to give their testimony. Following that, the defence lawyer (who is the person defending the accused) will cross-examine the witness; this means, the defence lawyer will ask another set of questions directed at the witness. The DPP then re-examines the witness (by asking questions) in order to explain any doubtful or contradictory answer given by the witness during cross-examination.

* This is a simplified version of the court trial process. For the full process, refer to http://wccpenang.org/wccnew/wp-content/uploads/2014/09/Surviving-Court-booklet_English.pdf