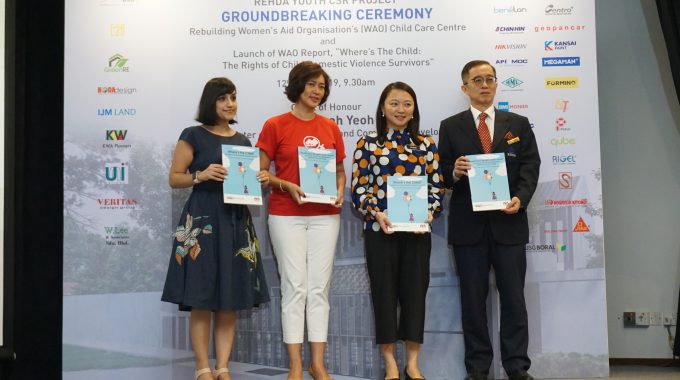 As the UN Convention on the Rights of the Child celebrates its 30th year in force, Women’s Aid Organisation (WAO) is launching the first report to highlight the experiences of child domestic violence survivors in Malaysia and underscore the need for child rights to be integrated into domestic violence response.

The WAO case study report, entitled ‘Where’s the Child? The Rights of Child Domestic Violence Survivors,’ includes 21 case studies illustrating the varying experiences of child domestic violence survivors, including those who have directly experienced abuse or witnessed the abuse of their mother by their father.

“The needs and best interests of the children are sometimes overlooked in domestic violence response,” said Sumitra Visvanathan, Executive Director of WAO.

“Through these case studies, which were compiled based on cases from WAO and partner service providers, as well as from interviews conducted with child survivors, we hope to put the voice of the child at the forefront of domestic violence response.”

The ‘Where’s the Child’ report advocates for a rights-based approach to domestic violence response, grounded in the four guiding principles of the UN Convention on the Rights of the Child (CRC).

“The CRC emphasises the principles of non-discrimination, participation of the child, upholding the best interests of the child, and the child’s right to life, survival and development,” said Sumitra.

“We believe these four principles need to form the basis of every aspect of domestic violence response, from the actions of the police, to the welfare department, to hospitals, to lawmakers, to NGOs.”

Finally, it makes recommendations to a variety of stakeholders as to how they can promote the best interests of the child in preventing and responding to domestic violence.

Among these recommendations is one to the police to automatically include child survivors who witness domestic violence in the referral letter for an IPO, recognising the trauma and harm that come to children from living in a violent household.

Another recommendation, directed at the Ministry of Education, is to mandate teachers and school administrators to report domestic violence and child abuse where the child’s welfare is deemed to be at risk.

According to a global study by UNICEF, around 275 million children worldwide are exposed to domestic violence, and this is a conservative estimate given the chronic underreporting of domestic violence and the lack of data around how many children are affected.

The ‘Where’s the Child’ report was launched by YB Hannah Yeoh today in conjunction with the groundbreaking of WAO’s new Child Care Centre, which is being undertaken in partnership with the Real Estate Housing Developers’ Association Youth Malaysia (REHDA Youth).

“We’re excited to share the learnings from our research with policymakers and key stakeholders,” said Sumitra.

“We hope that we as a community can work together to implement the recommendations in the report, and to ensure that we are providing the best possible response to child survivors of domestic violence.”

‘Where’s the Child: The Rights of Child Domestic Violence Survivors’ is available at https://wao.org.my/publications/wheres_the_child/.

On Saturday 3 December 2011, WAO's Letter to the Editor was published in The Star.…

Computer use can be monitored and is impossible to completely clear. If you are afraid your internet usage might be monitored, call the WAO Hotline at 03 7956 3488 or SMS/WhatsApp TINA at 018 988 8058. To escape the site and be redirected to Google, click the red EXIT button on the right.